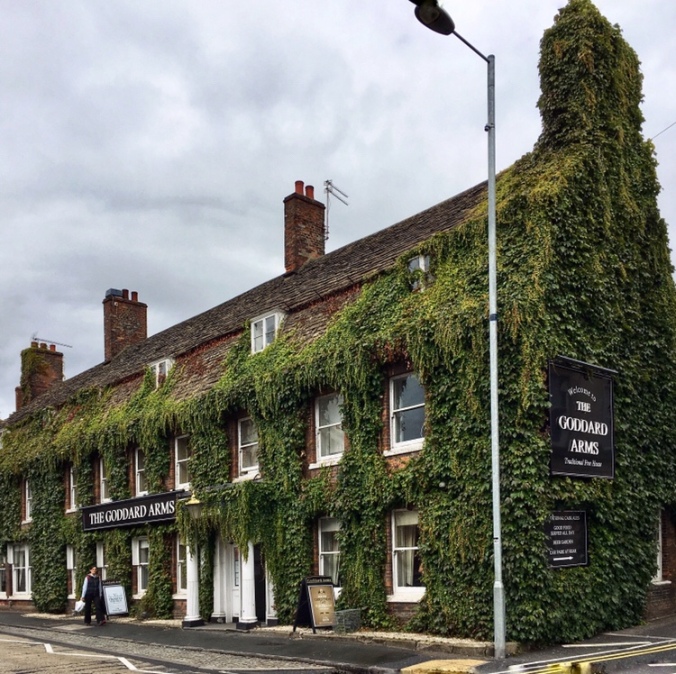 Swindon’s oldest hotel started life as a coaching inn when it opened its doors in 1810. It was named in honour of the Goddard family.

The following is taken from The Swindon Advertiser from 11 April 2008, Hotel’s History of Love and Murder:

The Goddard Arms became, for more than a century, the focus of Swindon’s commercial life.

Livestock and property auctions were held there and magistrates and county court hearings were held in its Assembly Rooms.

In 1819 hangman Jack Ketch, and the criminal he was to execute early the next day, both spent the night there.

The criminal, named Watkins, convicted of attempting to murder a Purton farmer on his way home from market, was reported to have eaten a hearty last meal before being taken in procession to the gallows, which had been put up at Purton Stoke.

The public hanging took place in a heavy thunderstorm and was witnessed by a large crowd, many of whom believed the condemned man was innocent.

In 1863 the body of a newborn infant, hidden in a lumber room at the hotel, was found by a shocked boots boy whose job was to clean guests’ shoes.

The body had been there for so long that it was impossible to discern the cause of death or even the baby’s sex.

Another, and perhaps even more shocking tragedy, took place at the Goddard Arms Hotel on April 29, 1914.

A 22-year-old painter and decorator named Walter James Harris arrived at the hotel and asked if he could see Frances Hunter, who worked there as a between floors maid, or ‘tweeny.

Unknown to anyone, Harris, described as “an eccentric but harmless-looking” young man, had a pistol in his pocket.

He had been walking out with Frances and was devastated when somebody told him she had had an affair with a married man while working in South Wales.

Harris took her to a coal shed at the rear of the hotel and asked her if the story was true.

When she admitted it was, he shot her dead.

Then he waited quietly to be arrested.

Within a week Swindon Magistrates sent him for trial at Wiltshire Assizes, where he denied murder.

His trial lasted less than a day and the jury took only half an hour to find him guilty.

They added a strong recommendation for mercy on the grounds of his youth and 5,000 people signed a petition asking for clemency.

Neither carried any weight with the Home Secretary. White was hanged at Winchester Prison on June 15, less than seven weeks after killing the girl he loved.