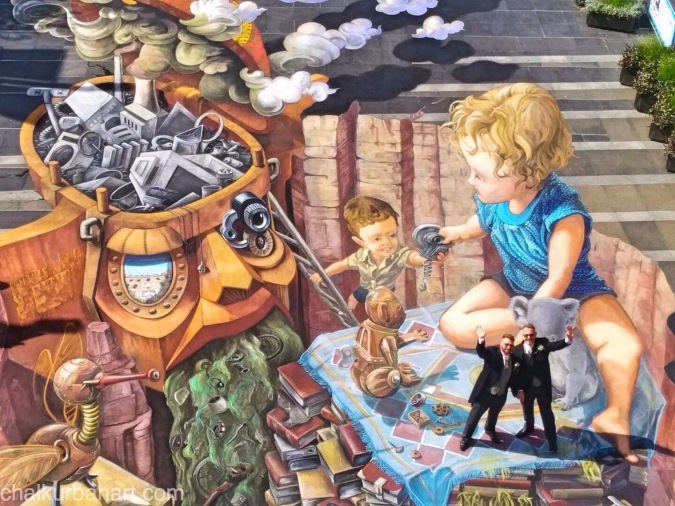 Being the product of a broken home and seeing so many failed relationships, led me to believe that marriage wasn’t for me. In 1993, my thirtieth year I fell in love with my future husband. Within two weeks of our first passionate encounter, we were living together.
At that time in the U.K. I had the perception that being gay was something that brought shame to the person and their family. I grew up trying to conceal the part of myself that was largely unacceptable to society. I became expert in hiding in plain sight. Doing everything to avoid the spotlight. The opposite was true in circumstances where I felt comfortable in being myself, to the point of outrageousness. Perhaps this is an insight into what might have been if I had explored this side of my personality.

A couple of trips to Sydney showed us a completely different culture. When interacting with staff in shops and banks we were engaged in conversations together, not individually. People generally appeared to be more friendly and accepting of differences. Having said that I remember conversations about boycotting products from the island state of Tasmania because sex between two consenting adult men was still illegal. This was decriminalised in 1997.

Combine blue skies, sunshine, and the Harbour with a lifestyle that offered freedom; this was an opportunity that should not be missed! With the the intention of giving it a go for two years, in 1998, we upped sticks to literally move to the other side of the World. By facing challenges together, we learned to depend on each other.

We have embraced Australia as our home for almost twenty years. Over that time the World has changed, dramatically, including same-sex marriage becoming a reality for one country after another.

In our twentieth year together, legislation came into effect that allowed same-sex marriage in England, Wales and Scotland, but not in Northern Ireland. On Saturday morning over breakfast in July we chatted about reports in the news that same-sex British citizens would soon be able to marry at the British Consulate. This coincided with a planned visit by my partner’s family, in October. We both commented at the same time time that this would be an ideal time to celebrate our love and the support of our family and friends. We then realised that we had proposed to each other.

Much planning and organising occurred from that moment up until Friday 24 October. My husband has kindly agreed that I can share the following post from his private Facebook page. It describes how we became part of the above picture by Zest Events International :

“As I have been asked to share this again…amazing chalk art picture, the largest ever created in Australia in the forecourt of Customs House.

The night before our wedding in 2014 we walked past the proposed location of our wedding photos and found the area barriered off. At the same time we bumped into a former work colleague, Andi, who explained her new company was creating the amazing artwork. She explained it was a comment on the current political situation in Australia. The mechanical head spewing toxic liquid and consuming books was the then prime minister, Tony Abbott (who was always a NO to same sex marriage and even at the eleventh hour yesterday was trying to derail it). The toddler in the picture, based on Andi’s niece, was left with nothing but mechanical creatures as the ones in nature had been destroyed. A sad picture indeed.

When we explained about out wedding, at the time only possible at the British Consulate, Andi insisted we should be part of the installation and be photographed on the picture. The artwork took two weeks and seven artists to create and as you can see it is 3D, a no mean feat on something so huge.

So the day of our wedding, we had an amazing lunch, went to the Consulate where numbers were limited to 20 guests. I fluffed my lines I was so overwhelmed with excitement, I ended up with both rings and we all cried with happiness. Drinks afterwards in the Customs House forecourt and pictures on the art work.

Now I admit I was concerned as to people’s reactions…I am sad to say I was concerned someone might say something nasty and spoil the day. One of Andi’s team had made us a chalkboard heart with “Just Married” which we had clipped to our lapel. We stepped out onto the picture and played around with where to stand, guided by someone located high above on Customs House. People started taking photos and asking if we had indeed got married, I beamed “Yes” more people gathered. Instead of insults the comments were nothing but congratulations and praise. A little old lady walked past thrilled for us. It couldn’t have been more perfect.”

We were also blown away when a bottle of Veuve Clicquot in an ice bucket arrived at our table. A generous gift from a group of people on there way back to Melbourne after visiting a production company on the North Shore.

Over the next two days, we shared our joy of being married with family and friends. The golden light that seemed to touch our lives after this special occasion lasted for over a year.

Our marriage will now be recognised by the county we have chosen to call home.