We arrived in the harbour city of Sydney, New South Wales on 17 January 1998. For the first ten years we did not consider living anywhere else.

The face of our chosen suburb, Newtown, gradually threw off its grungy working class garb. Gentrification crept through the streets. Great news for house prices as rough edges of the area were smoothed. For the niche bars, retailers and eateries, rising rents pushed them out.

Joining the exodus, we made our way, step by step west to aircraft noisy Stanmore then sleepy Petersham before landing in luscious Leichhardt. In hindsight, we should have settled here, instead of chasing the bright lights of Newtown.

Arriving too late to secure a residence we journeyed 917 kms north (570 miles) to Morningside. The vibe in Queensland is more relaxed than we are used to. Ignoring the Summer daylight saving implemented by other states, Queenslanders arise and retire early to bed.

Here we are in the river city of Brisbane, celebrating 22 years in Australia. Uncertain of where life will take us next. 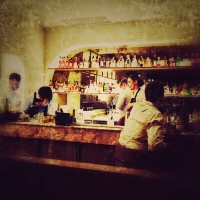